This third excerpt featuring an appearance by the Academy Awards skips over two other Oscar appearances by Abigail Phelps, and isn’t even the final one in her story. But in the interest of avoiding major spoilers, this is the last one I will bring to you today. By the time this one rolls around, we are up to book three, Two Thousand Years. Abby Phelps and George Clooney have been through a lifetime of fame, laughter, and heartbreak together. No longer the young kids at their first Oscars ceremony, in 2006 they are Hollywood royalty.

George won his first Oscar in 2006. He won Best Supporting Actor for Syriana, but he was also nominated for Best Director and Best Original Screenplay for Good Night, and Good Luck. I was so immensely proud that night. And I was thrilled to be at the Academy Awards to cheer him on, and he and I introduced the In Memoriam segment together. It was quite the night.

After the ceremony, George and I went to that same little diner in Los Angeles that we always go to, where we never get caught. He was still in his tux and I was in my designer gown, though my heels had been replaced by flip-flops. We were just kind of in shock at the lives that we were leading. Two kids from Northern Kentucky, who only met because his dad was a local celebrity and I was trying to be one, had each won a Supporting Oscar. In addition, I’d been nominated for acting several times, each of us had a Best Original Screenplay nomination under our belt, and George had added a Best Director nomination to the list.

It was an evening during which we alternated between feeling comically smug and ridiculously unworthy. More than anything, we celebrated our friendship and everything we had been through together. And then, the new Oscar winner made me an offer I shouldn’t have been able to refuse.

“Ocean’s Thirteen,” he said, with a cocky smile.

“Oh, come on,” I laughed. “Didn’t we do enough damage with Twelve?”

“The script’s already written, Abby, and it’s good. Much better than Twelve. Maybe better than Eleven. You’ve had enough of a hiatus, right? Time to get back to it.”

I just shook my head.

“And I still get to present with you at the Academy Awards,” I smiled. “So it’s not a big deal really, is it?”

“Well,” he took an enormous bite of his burger, “think about it and let me know.”

Well, Thirteen went on to make more than $300 million worldwide, and it was much more well-received than Twelve had been, but I didn’t regret not being involved. I visited the set a few times to hang out with the guys, and that was good enough. I didn’t feel like anything was missing from my life. Except for my kids and Chris, of course, but I had come to terms with it all as well as I was ever going to. 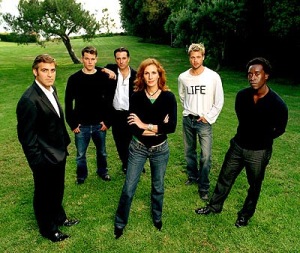